This page is an early version of work relating to chromatic adaptation. The topic was eventually developed further and published in preprint form here, and later published in the journal Color Research & Application (Burns SA. Chromatic adaptation transform by spectral reconstruction. Color Res Appl. 2019;44(5):682-693). Use the contact form on this website to request a copy of this paper.

This webpage remains online mostly because it provides a “gentle” introduction to what a chromatic adaptation transform is and does. The published journal paper is peer reviewed, and contains a much more concise presentation of the idea, along with a more thorough analysis of its efficacy in comparison to modern CATs, such as CAT02 and CAT16.

The color stimulus that enters our eyes when we view an object can be thought of as the product of an illuminant and an object reflectance. Both are usually described as a distribution over a range of visible wavelengths. The color sensation we experience can be modeled as the product of the stimulus and a matrix of color matching functions (CMFs), suitably scaled to account for the “reference white” of the illuminant. The outcome of this computation is a triplet of values, XYZ, called tristimulus values. These tristimulus values can be further transformed into other color spaces, such as RGB or L*a*b*.

Predicting the change in tristimulus values due to a change in illuminant is a common task, such as in image editing programs like Photoshop. In this case, we do not have access to the reflectance properties of the objects being viewed in the image. Instead, we have only three color-space coordinates (e.g., sRGB) at each pixel. This is where the “chromatic adaptation transform” comes into play.

The Bradford CAT (as well as other von Kries type CATs, such as CMCCAT2000, CMCCAT97, and CAT02) operate by transforming the tristimulus values to a space of “cone responses,” which are intended to model how the three types of cones in our retina behave. Then these cone response values are scaled according to a function of both the old and new illuminants, and then are transformed back to the original tristimulus space. Nowhere in this process are the reflectance properties of the objects in the image utilized directly. Note that the transform matrix relies only on the tristimulus values of the illuminant white points, not the full illuminant spectra.

The optimization statement that produces this least slope squared reflectance is

The optimization takes place in the space of

is the reflectance curve, discretized over 36 wavelength bands from 380 nm to 730 nm in 10nm intervals. Working in log space eliminates the possibility of the reflectance going negative because

is a 3×36 matrix that transforms reflectance

, and is computed as

is 3×36 and contains the color matching functions by rows.

is a 36×36 matrix with the illuminant

on the main diagonal and zeros elsewhere. Scalar value

is the inner (dot) product of the second row of

, ensures that the reflectance curve and illuminant produce tristimulus values that match the specified

The solution of the optimization can be achieved several ways. A general-purpose optimization solver can be used, such as Matlab’s fmincon function or Excel’s Solver Add-in. The computational effort is substantial in this case. Instead, it is useful to take advantage of the special structure of this nonlinear program, which is described in detail in the “LLSS” section of the prior publication mentioned above. Here is a Matlab program that solves the optimization in an efficient way using the LLSS method. 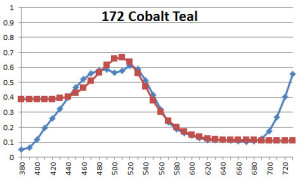 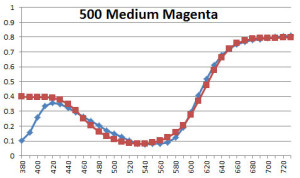 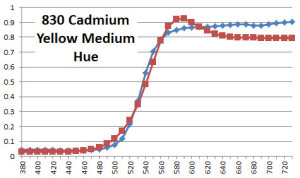 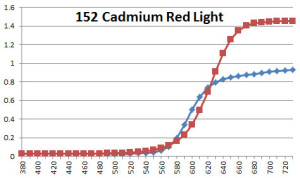 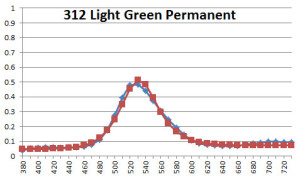 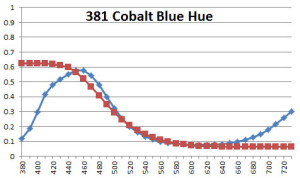 Notice how there tends to be more discrepancy between the original reflectance curve and the reconstructed one at the very high and low wavelengths. Human vision is far less sensitive to these outer wavelengths, so these discrepancies have very little impact on perceived color. The optimization process takes advantage of this reduced visual sensitivity and keeps the slope as close to zero as possible at both ends of the spectral range. Keep in mind that even though the two curves may differ considerably at the ends, they both share the identical tristimulus values and perceived color.

The proposed CAT algorithm is as follows:

Here is a three-line Matlab function that does this, using the Matlab LLSS_XYZ function discussed above:

If a different color space is desired, such as sRGB, then simply wrap the function above inside transformations to and from XYZ: 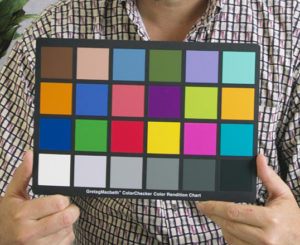 This section compares the Bradford adaptation method to the new proposed one for a variety of source and destination illuminants. To check the quality of the adapted XYZ values, it is necessary to have reflectance information about the objects being evaluated. Here, we use the Gretag-Macbeth ColorChecker, shown to the right. Measured reflectance properties of each color are available, and this study used the set from the BabelColor website located here. Note that the measured reflectance information was used only to assess the quality of the CAT results, and not used by either method to produce them.

For each of the first 18 colors in the ColorChecker, both the proposed method and the Bradford method was used to adapt the source XYZ values using all combinations of pairs of illuminants A, B, C, D50, D55, D65, D75, and E (equal energy). The color difference between the predicted destination XYZD and the true XYZ computed under the destination illuminant was found using the

ECIE 1976 color difference measure. For each pair of illuminants, the RMS

E were computed over ColorChecker colors and tabulated. 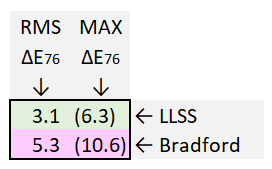 In each box of the table, the RMS

E is on the left and the maximum

The proposed method has roughly half the color difference of Bradford, indicating a much better prediction of how the ColorChecker tristimulus values will respond to a change in illumination.

While the results for the proposed method are very good in comparison to the Bradford CAT, there is considerable computation required. Timing studies show that the computational effort of the adapted XYZ using the new method is about 200 times that of the Bradford computation (which is just a simple matrix multiply). If a CAT is being applied to every pixel of an image, this large computational demand may not be warranted.

To address this, I considered other, less computationally intensive reflectance reconstruction methods. Referring to the previous work cited above, I re-did the study using these two additional methods:

ILSS requires about 10 times the computational effort of Bradford. LSS has the same computational effort as Bradford (a simple matrix multiply). The price to be paid for the increased efficiency is that the quality of the reconstructed reflectances (in terms of how well they match colors found in nature) decreases as we move from LLSS to ILSS to LSS. 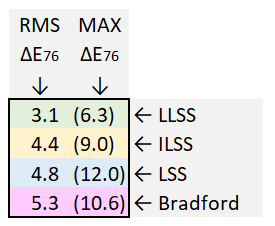 Here is a summary of the performance of the four methods. Each box has four rows: green for LLSS, yellow for ILSS, blue for LSS, and pink for Bradford. 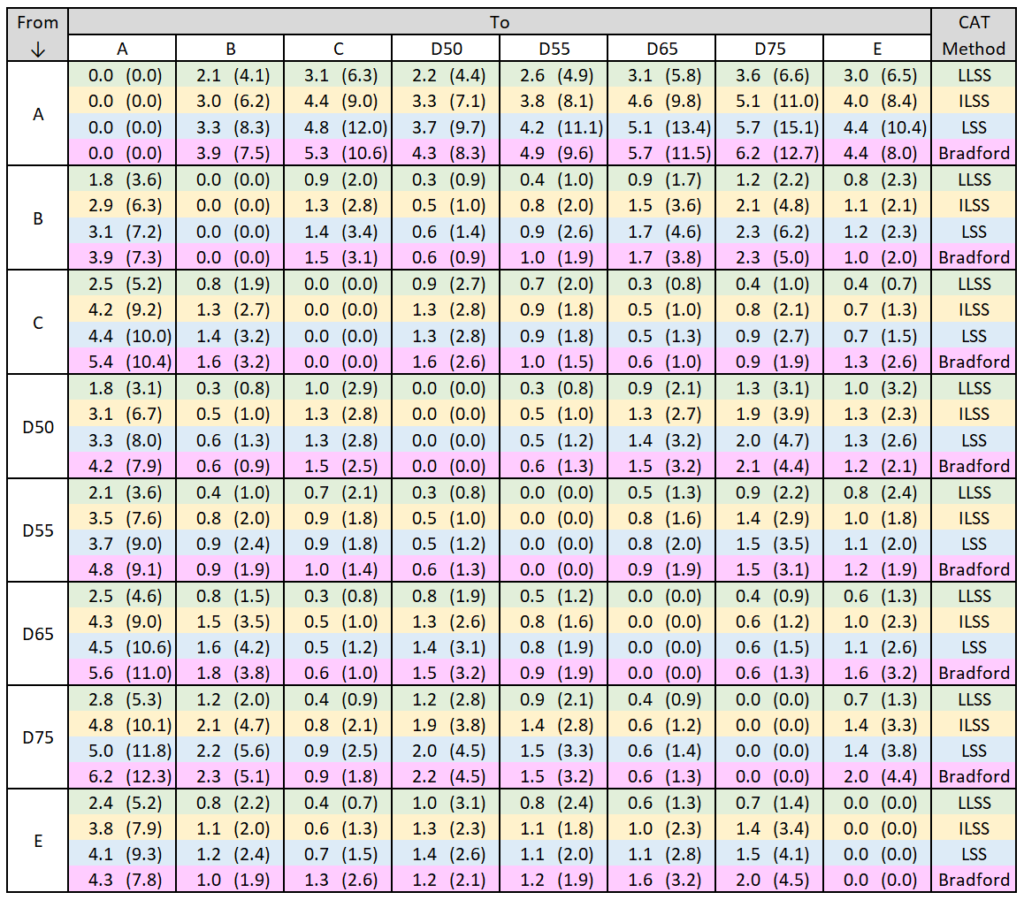 ILSS generally performs better than both LSS and Bradford. LSS is comparable to Bradford, having slightly smaller RMS values in general, but occasionally higher maximum values. Since the computational effort for LSS matches that of Bradford, it is a viable candidate for image processing tasks. In the next section we’ll see that in some circumstances, LSS performs much better than Bradford. 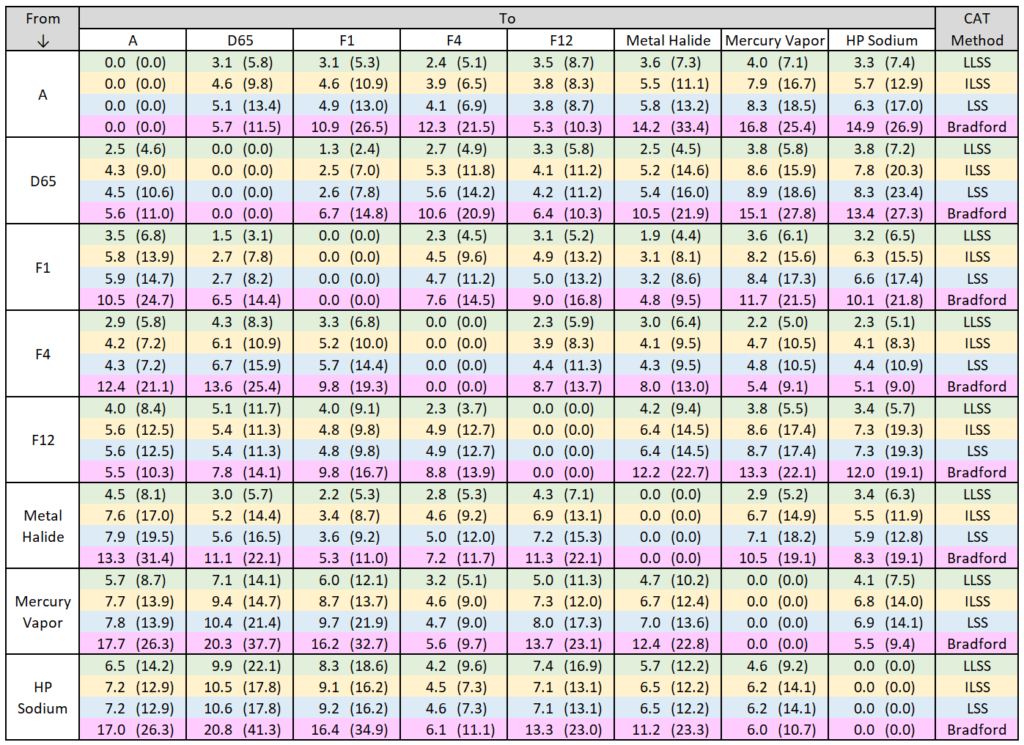 This study reveals that the Bradford CAT has difficulty responding to illuminants with spectra that have spikes of energy at various wavelengths. This is not surprising considering that Bradford only knows about the illuminant white point tristimulus values, XYZW, which mask the spikes in the illuminant distribution. Even the least capable of the three proposed methods (LSS) greatly outperforms Bradford when transforming to or from these more extreme conditions.

To compute the 3×3 CAT matrix for the LSS method, given the source illuminant,

, and the destination illuminant,

, first compute the two matrices that convert reflectance to tristimulus values, referenced to the two illuminants:

Next, find the inverse of the following matrix:

Now extract the upper-right 36×3 part of

. The 3×3 CAT matrix for the LSS method is then

depends only on the two illuminants and can be computed ahead of time. To apply it to a specific

The Bradford CAT has been superseded in recent years by some newer, more complex CATs, such as CMCCAT2000 and CAT02. Bradford was chosen for this study because of its ease of implementation. It would be useful to extend this study to consider some of these newer CATs as well. Another possible direction for investigation is to cast the spectral distributions in the frequency domain instead of wavelength domain. The slope of the reflectance curve will differ when plotted against frequency, and this may have an impact on the results.