In a previous presentation on generating reflectance curves from sRGB triplets, I presented several algorithms for creating a reasonably realistic spectral reflectance curve associated with a given sRGB color. This publication is a short note on applying the methods to a more recent RGB implementation called Recommendation ITU-R BT.2020-2 (10/2015), or Rec. 2020 for short.

The colorimetric specification of this RGB system is: 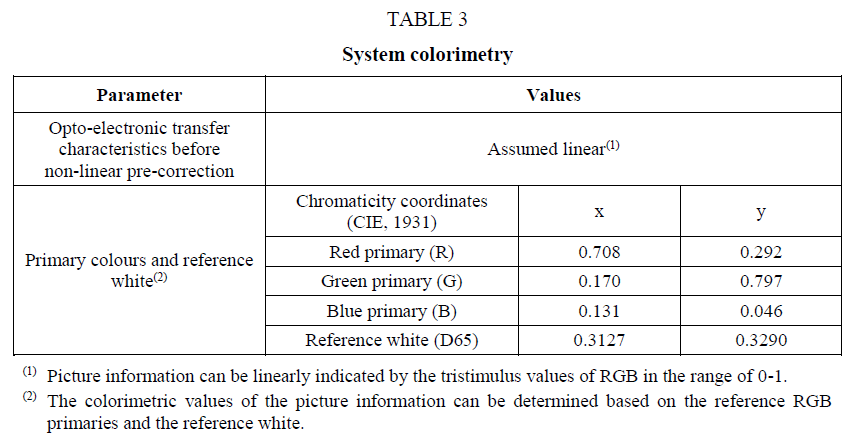 The main task in applying the reflectance generating algorithms to Rec. 2020 is to create a new

, to linear Rec. 2020 rgb through the relationship

Once this is done, just substitute

in any of the previous algorithms to make them specific to Rec. 2020. Recall that

is a 3×36 matrix of color matching functions (CMFs) that relate a 36×1 reflectance vector,

is a 36×1 illuminant vector, which is Standard Illuminant D65 in this case. The expression diag(

on the main diagonal and zeros elsewhere. The scalar

here is the tricky part. It relates

Bruce Lindbloom has a handy page that describes the creation of M. The computation only requires the chromaticity coordinates of the RGB primaries and the tristimulus values of the reference white. For D65, these are 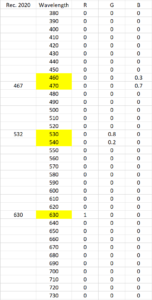 I made one minor adjustment to the Rec. 2020 specs to compensate for the 10 nm intervals in our calculations. The R/G/B chromaticity coordinates shown in Table 3 above correspond to single wavelength primaries at 630 nm, 532 nm, and 467 nm, respectively. Since the last two wavelengths don’t fall on the 10 nm intervals, I modified them just slightly. The G primary is changed to be the combination of 80% 530 nm light and 20% 540 nm light. The B primary is changed to be 30% 460 nm light and 70% 470 nm light. This is shown in the table to the right (click to enlarge).

) = (0.1312, 0.0478). This change greatly improves the stability of the optimization process (by avoiding slight constraint infeasibility very near the spectral envelope) and changes the

values by only 0.00074 at most. Note that if a smaller wavelength interval is used to form the

matrix, specifically 1 nm intervals, then this interpolating step is not necessary since the primaries at 467 nm, 532 nm, and 630 nm each align with a single wavelength band.

We now have all the ingredients to build our

which is available here.

Here are some results from applying a general-purpose optimization code (Matlab’s fmincon) to the nonlinear program (ILSS), using

instead of the sRGB version of 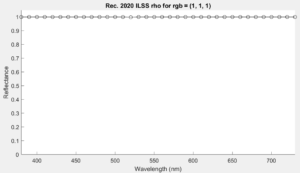 An example of a color like mauve, which is smooth, as expected.

I tried to use a highly saturated rgb, like (1,0,0), but the method failed (the optimizer reported it lost constraint feasibility). I used progressively smaller values for r until I found something that worked, rgb = (0.079, 0, 0). It ended up being a very dim, single wavelength spike at the Rec. 2020 r primary (630 nm). 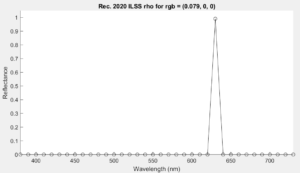 The brightest purely saturated red I could find that worked in the optimizer.

Even though the optimizer was trying to find the reflectance curve with least slope squared, it had no recourse but to end up with a very non-smooth solution. This issue is addressed in the next section.

UPDATE 1/21/20: The discussion above was working under the assumption that a reflectance curve in the range 0-1 was necessary. If we relax the upper bound, and only require that the reflectance is positive, then we have access to many more solutions. See the January 7, 2020 update below for further discussion on this matter. If the 0-1 bounds are desired, then continue reading this section.

When I originally developed the methods for converting sRGB values to reflectances, I was pleased to find that they worked for all values of sRGB. Furthermore, the two methods that guarantee reflectance curves in the range 0 to 1 produced a valid answer for all sRGB inputs. This will not be the case with Rec. 2020. Because the primaries are single wavelength lights, there are values of linear Rec. 2020 rgb triplets that have no corresponding reflectance curves in the range 0 to 1. Colors that can be represented by spectral reflectance distributions that vary between 0 and 1 are known as “object colors.”

Consider a reflectance curve with all zeros except at 630 nm, which is given a value of 1. This is the red primary in this color space. If we pre-multiply this reflectance by

, we will get the Rec. 2020 rgb triplet corresponding to the reflectance. It comes out to be rgb = (0.0798, 0, 0). This reflectance represents a very dim, but extremely saturated red color. If we try to find a reflectance curve with a larger red rgb component, the only way that is possible is for the reflectance to exceed 1 in some places. This will manifest itself in the optimization methods as lost feasibility in the case of general-purpose optimization codes, or as bad conditioning (singular matrices) in the case of the tightly implemented algorithms like ILLSS, etc.

I was curious to find out just how much of the Rec. 2020 color space can be represented by reflectance curves with 0-1 range. I wrote a program that generated a large set of reflectance curves that contained only 1s and 0s, having one or two contiguous blocks of 1’s and 0s elsewhere. These are “optimal” colors that form the outer surface of the object color solid. All of these reflectance curves were then premultiplied by 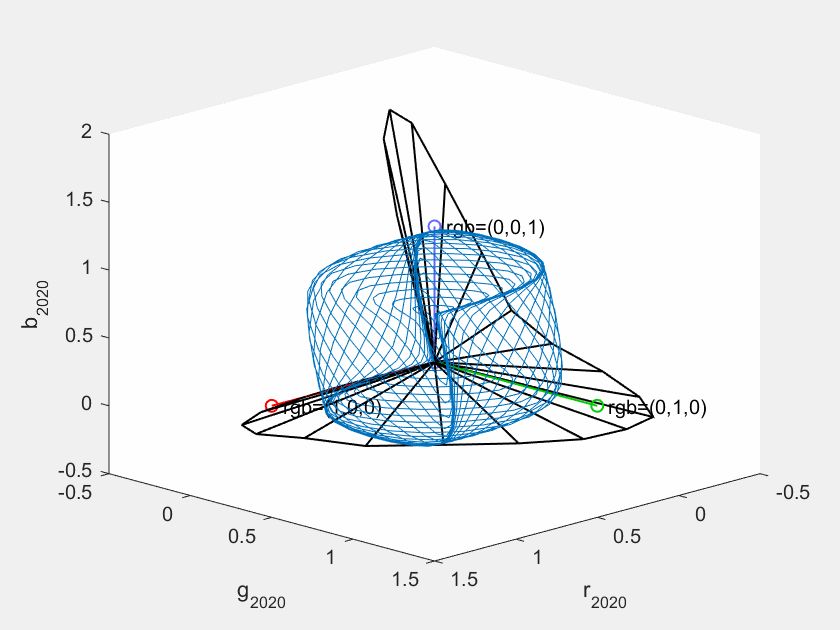 Here are some views from specific angles: 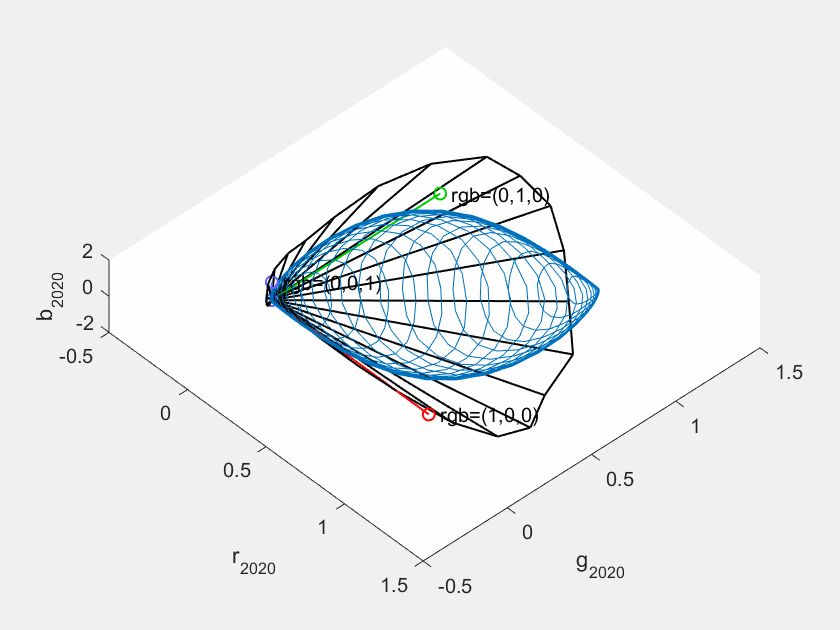 Another angle of the rotation of axes gif (hover mouse over it to animate, click to enlarge). 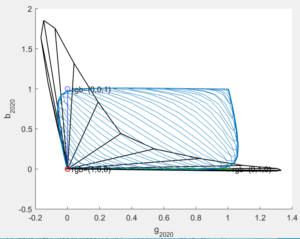 Region of object colors (blue) in Rec. 2020 space, viewed down the r-axis.

Region of object colors (blue) in Rec. 2020 space, viewed down the g-axis. 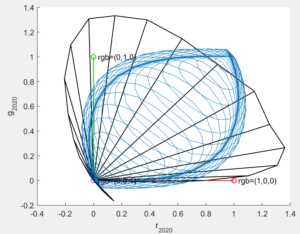 Region of object colors (blue) in Rec. 2020 space, viewed down the b-axis.

The conclusion here is that if Rec. 2020 is intended to be used to generate reflectance reconstructions in the 0-1 range, an additional check should be performed to make sure the rgb values are within the object color boundary. 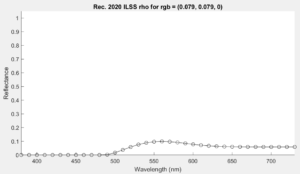 Adding a tiny bit of another rgb component changes the spiked curve into a very smooth one.

Apparently, the additional green component pulls the color far enough away from the spectral envelope to allow the optimizer to find the broad, smooth spectrum reflectance curve it is seeking.

. The three methods in the journal paper are called methods 1, 2, and 3. They are related to the webpage methods as:

Method 1: Applies the LSS (Least Slope Squared) method to generate reflectance curves from any XYZ values. It is very fast, but some curves may end up with reflectance values above or below the 0-1 range.

Method 2: Applies the LLSS (Least Log Slope Squared) method to generate a strictly positive reflectance curve from any XYZ values that fall within the spectral locus.

Method 3: Applies the LHTSS (Least Hyperbolic Tangent Slope Squared) method to generate a reflectance curve strictly between 0 and 1 for any XYZ values that fall within the object color solid.

It dawned on me that it would be very easy to apply methods 1-3 to the Rec. 2020 color space by simply substituting the

matrix of color matching functions with the

First let’s look at method 3 applied to Rec. 2020 space, which will give results very similar to what is presented above. Here is the MATLAB/Octave code for method 3, as it appears in the paper:

Note that the code is broken up into two parts. The first part computes two arrays that depend only on the illuminant (D65 in this case). The second function constructs the reflectance curve from the illuminant-referenced tristimulus values,

. Normally, the first function would be called once, and then a series of reflectances would be computed by the second function. This is much more computationally efficient than recomputing the first two arrays over and over if we are considering only a single illuminant.

computed above in place of

(Note that we don't need to compute

since we already have

. However, we do need to form the

matrix. Also note that the transpose of

Method 3 has the same restrictions that were discussed above, that is, the rgb values must be within the object color solid in Rec. 2020 space. However, method 2 releases this restriction, as discussed below.

Generating reflectance curves for any Rec. 2020 rgb within its chromaticity gamut

Method 2 applies to any

Here is the code for method 2:

Here are some reconstructed reflectances from key points in the Rec. 2020 gamut, and the MATLAB code that generated the curves and their plots: 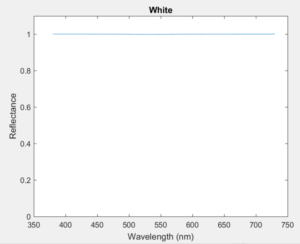 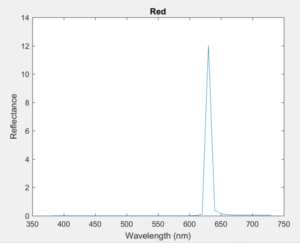 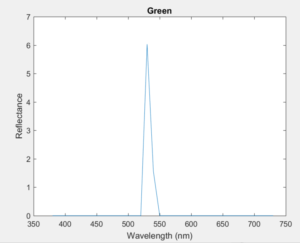 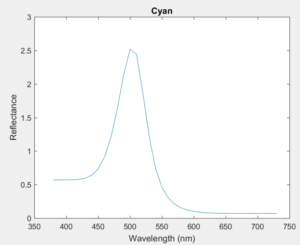 Note that the value EPS = 1e-6 is used in place of zero. Method 2 can only produce reflectance curves that are strictly > 0, so this helps with stability of the method.

You might notice that many of these "reflectance" curves have values greater than one. Normal, non-fluorescent objects can't have reflectances > 1.

Is this a problem? No, not really.

matrix is referenced to illuminant D65. That means that a perfect reflector (rho = 1 everywhere) will reflect D65 as a spectral power distribution. Here is D65: 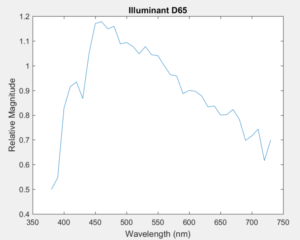 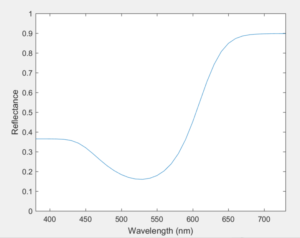 The light emitted from the object under D65 is the element-by-element product of the reflectance and the illuminant: 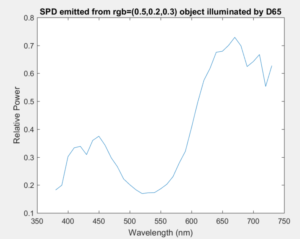 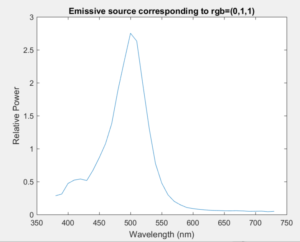 Thanks to Brien Dieterle, Mark (user kram1032), Chris Cook (user smilebags) and Troy Sobotka (troy_s) on a Blender discussion site for the interesting discussions that prompted me to look into this.

Rec. 2020 RGB to Spectrum Conversion for Reflectances by Scott Allen Burns is licensed under a Creative Commons Attribution-ShareAlike 4.0 International License.