This page is additional supplementary documentation, referenced from:

Please note that the content of this page should not be considered peer reviewed by the journal, as it may be updated at any time. This page was last updated on the date shown at the bottom of the page.

, who developed the objective function to minimize slope squared over the visible wavelengths. In his “unconstrained” formulation, the only constraint imposed on the solution ensures that the triplet of tristimulus values computed from the reflectance reconstruction matches the desired target triplet. In regions of the object color solid where the unconstrained solutions have

values outside the 0-1 range, van Trigt introduced equality constraints to enforce that

remains in the range 0-1. He also constrained the system so that the slope of the reconstruction is continuous everywhere. Implementing his method requires that 16 different cases be considered.

To simplify this task, Li and Luo

. This change mades the problem easier to solve, but introduces the possibility of slope discontinuities in the solution at points where the inequality constraints transition from active to inactive or vice versa. The method produced by Li/Luo’s implementation of van Trigt’s method is called vTLL here.

This page concerns the frequency with which smoothest reflectance reconstructions with explicit inequality constraints on reflectance magnitude (e.g., vTLL) have the potential to violate

continuity (discontinuity in slope). In some cases, slope discontinuities can give the reconstructed reflectance curve an unnatural, truncated appearance. The following computational experiment was performed: a tightly spaced 3-D lattice of tristimulus values spanning the object color solid was generated and used as target tristimulus values for the vTLL method. The vTLL method was performed for each of these target colors. The following plots show which lattice points produce reconstructions with active inequality constraints, plotted on the chromaticity diagram for various 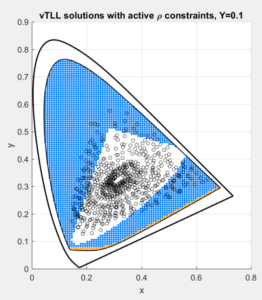 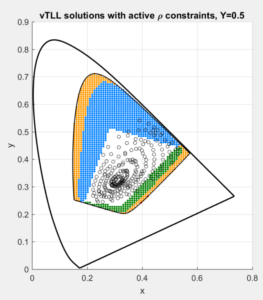 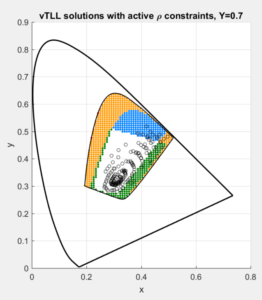 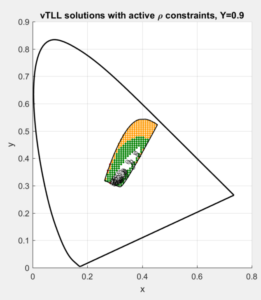 Orange dots indicate that both upper and lower bounds are active somewhere along the vTLL reconstructed reflectance curve.

White regions correspond to object colors that have vTLL reconstructions with no active inequality constraints.

Black circles are Munsell colors that have

These plots indicate that the large majority of the 1485 Munsell colors fall within the white regions, i.e., regions where no explicit constraints on

are active and so the reconstructed reflectance curve is

continuous. Nevertheless, there are a significant number of Munsell colors outside of the white zones, which will have active constraints on

under the action of vTLL.

discontinuities. The only exception to this would be curves that happen to have zero slope precisely at the point where the inequality constraint transitions from active to inactive, or vice versa. Without formal evidence, the author posits that these occurrences are vanishingly rare.