Our eyes are sensitive to a range of electromagnetic radiation oscillating faster than radio waves and microwaves, but slower than x-rays and gamma rays. The wavelength range of visible light is roughly 400 to 700 nanometers (nm) going from the violet end to the red end of the spectrum.

The Visible Spectrum (By Spigget [CC BY-SA 3.0] via Wikimedia Commons)


Generally, we can describe how an object appears to have a color as a four step process.

Let’s look at each step in more detail: 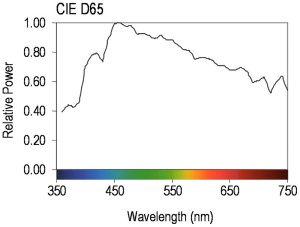 A light source has various levels of power at each frequency that can be summarized in a plot of relative power vs frequency, for example, as shown in the figure.

This is one of the “standard” illuminants used in colorimetric studies, called D65. It resembles daylight and is the reference illuminant for the sRGB color space (more on that later). Notice how it peaks more toward the blue end of the spectrum, making it a “cooler” light source than indoor incandescent illumination, which has much more power on the red end of the spectrum. 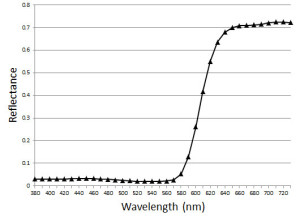 The reflectance properties of an object are conveniently summarized in a reflectance curve, which describes the fraction of incoming light that is reflected at each wavelength. This can be measured using a spectrophotometer. For example, the reflectance curve shown in the figure was measured from a bright red object.

Notice how this red sample reflects around 70% of the longer wavelengths, and very little of the shorter wavelengths.

Since reflectance is a fraction of reflected light, it falls in the range 0 to 1 at each wavelength. The only exception to this is with fluorescent objects, which can reflect more that 100% of incoming light at certain wavelengths, and therefore, have some reflectance values greater than 1. 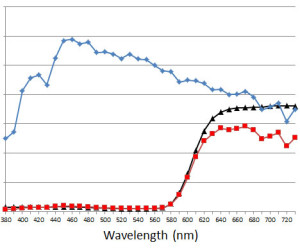 The final light stimulus (red) is the product of the illuminant (blue) and the reflectance (black).

To get the distribution of light that enters our eyes (the “stimulus“), we simply multiply the illuminant by the reflectance, as shown by the red curve in this figure.

The last step is to describe mathematically how our brain interprets a color stimulus, providing us with a color sensation. It can be described by a fairly simple matrix equation:

is the stimulus vector with

is a 3×3 conversion matrix between “tristimulus values” and “linear RGB” values,

is a normalizing factor that is related to the illuminant, and

is the 3×1 RGB description of the color before gamma correction, or the “linear RGB” values.

More Details...
The three rows of the

matrix. It summarizes how a human observer would mix three specified primary colored lights to visually match a fourth target color. When

is multiplied by the stimulus vector,

, and divided by a normalizing factor,

, a three-valued color specification is produced, in this case, a set of “tristimulus values,”

, is simply the scalar product of the illuminant vector and the second row of

. This makes the tristimulus

are converted to linear rgb values through a linear transformation matrix,

matrix has the values shown here.

Note that I’m using the symbol

indicates that it has been transposed.

This can be further simplified for the special case of obtaining linear RGB values,

, directly from a reflectance curve,

terms can all be combined together ahead of time into a single matrix,

is the product of the illuminant and the reflectance curve,

, the illuminant can be extracted from

and also be combined into the

matrix, leaving only the reflectance curve behind:

is a vector of reflectance values in the range 0 to 1.

, can be expressed as the product of a diagonal illuminant matrix,

, and a reflectance vector,

. Putting the illuminant on the diagonal of a matrix will yield a stimulus vector of the proper shape when multiplied by the reflectance vector,

. Now, when the stimulus is expressed this way, it is evident that

and the length of

depend on how finely we measure the reflectance curve. Typically, it is measured every 10 nm in the range 380 nm to 730 nm, making

a 36×1 vector. Here are the specific values for the

matrix (again, for the special case of D65-referenced linear RGB calculation from a reflectance curve).

More Details...
If you wish to experiment with this matrix in Excel, you can copy the tab-delimited values obtained from the link above, and paste them into Excel (use Paste Special -> Text). Then just matrix-multiply it by the reflectance vector (in Excel: =MMULT(T_array,rho_vector) and press ctrl-shift enter).

The final step to get true sRGB values from the linear RGB values is to apply a type of gamma correction, also known as “companding” or applying the “color component transfer function.” This process will be familiar to anyone using the Levels function in Photoshop, when moving the middle Levels control. The sRGB companding action compresses higher values of RGB and expands lower values, giving a more pleasing and realistic-looking sRGB color space.

More Details...
A simple, approximate way to do this is to raise each of the

to the 1/2.2 power. The more complicated, actual specifications for sRGB require this transformation: for each

Thus, we now have a way to compute an sRGB triplet given a particular reflectance curve,