Change Log
3/11/2021 Original publication the Article on arXiv.
3/24/2021 Scope of original paper reduced and surplus material moved here.
3/25/2021 Added plots of high transition solutions for the convexified and truncated CMFs.
3/26/2021 Added comparison of reflectance curves and completed presentation.
3/27/2021 Added an extra figure for Section 7 of the Article and plots of “Object Color Space” color descriptors.
4/30/2021 Prefixed figure numbers with “SD-” to distinguish them from the original Article figure numbers.
5/14/2021 Added notice of acceptance for publication in Color Research and Application.
5/14/2021 Outlined the major changes between the preprint version and the peer-reviewed journal paper.

This page contains supplementary documentation for the article “The Location of Optimal Object Colors with More Than Two Transitions,” which is available in preprint form at arXiv. Any reference to “the Article” on this page refers to this document.

Update: The paper has now been accepted for publication in Color Research and Application and will appear soon. The journal paper is substantially different from the preprint at arXiv. In particular, much of the supplementary documentation on this page has been moved back into the paper at the request of the reviewers. The journal paper will have a new supplementary documentation web page that reflects the changes. In addition, the journal paper has new material relating to the modern “physiologically-relevant” color-matching functions transformed from cone fundamentals. Please contact the author for publication requests.

Please note that the content of this supplementary documentation page should not be considered peer reviewed, as it may be updated at any time. This page was last updated on the date shown at the top of the page.

In Section 7 of the Article, five different highly chromatic illuminants were examined, having chromaticities matching Munsell colors 5R 5/14, 5Y 8/16, 5G 7/10, 5B 6/10, and 5P 4/12. A plot of the chromaticity diagram was presented, showing the high-transition regions associated with each illuminant, plus a sixth equal energy illuminant. Figure SD-1 below presents the same high-transition data shown in Figure 9 of the Article, but plotted on the object color solid (OCS), as viewed from the outside. 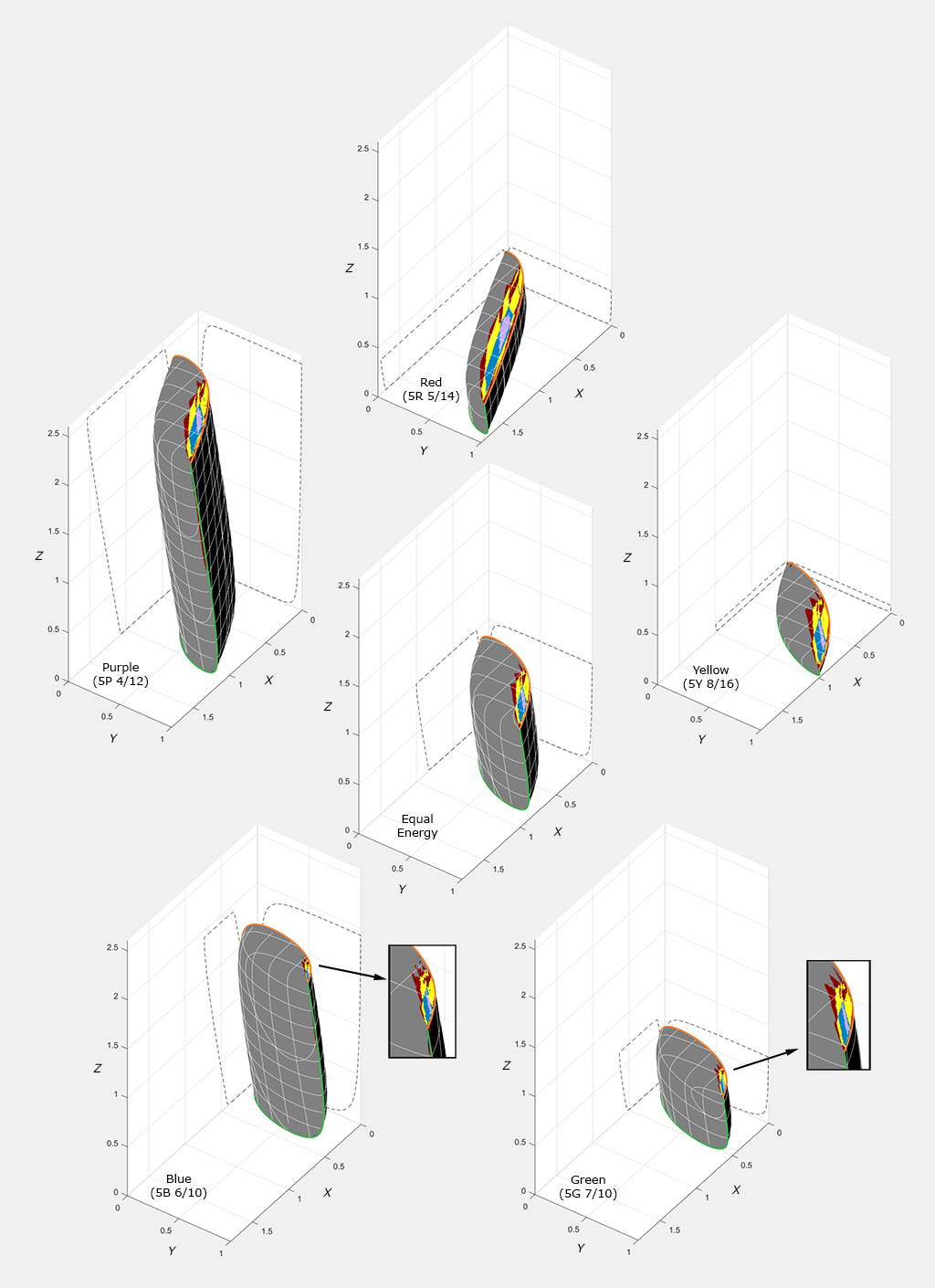 Figure SD-1. The effect of five highly chromatic illuminants on the regions of high-transition optimal colors, as view from the outside of the OCS.

The dashed lines are projections of the OCS onto the XZ and YZ planes. This figure was not included in the Article because the Article was getting too long and figure laden. It is shown here for completeness.

Linear Portions of the Chromaticity Diagram

The earliest mathematical proof of optimal object colors having at most two transitions is attributed to Schrödinger. Brill, in his technical introduction to Kuehni’s English translation of that paper,

CIE chromaticity diagram, as shown in Figure 1 of the Article. It is natural to ask, are the high-transition optimal colors found by the LP caused by the linearity of that portion of the spectral locus, instead of by the non-convexity of the spectral locus? Centore had an interesting insight.

He suggested perturbing the chromaticity diagram by a very small amount to make it convex. This may eliminate the higher transition solutions and return them all to the two-transition Schrödinger form.

To convexify the CMFs, we perform the following slight perturbations: First, we identify a pair of chromaticity coordinates that belong to the convex hull boundary that enclose one or more points not on the boundary (the red dots in Figure 1 of the Article). For example, the points at wavelengths 574 nm and 612 nm enclose 37 points not on the convex hull boundary (575 nm to 611 nm). Then we mathematically construct a straight line that connects the two convex hull points. Now for each interior “red” point, we construct another line that passes through the red point and the central white point of the chromaticity diagram. The intersection of these two lines will have slightly different

coordinates than those of the red point. We can convert these modified

values (along with the original

value of the red point) to tristimulus values,

, and replace the corresponding row of the CMFs with the adjusted values. We repeat this for each red point between the two enclosing convex hull points. This creates a straight line of modified red points that is now part of the convex hull boundary.

This convexification of an internal “red” point is demonstrated graphically in Figure SD-2. 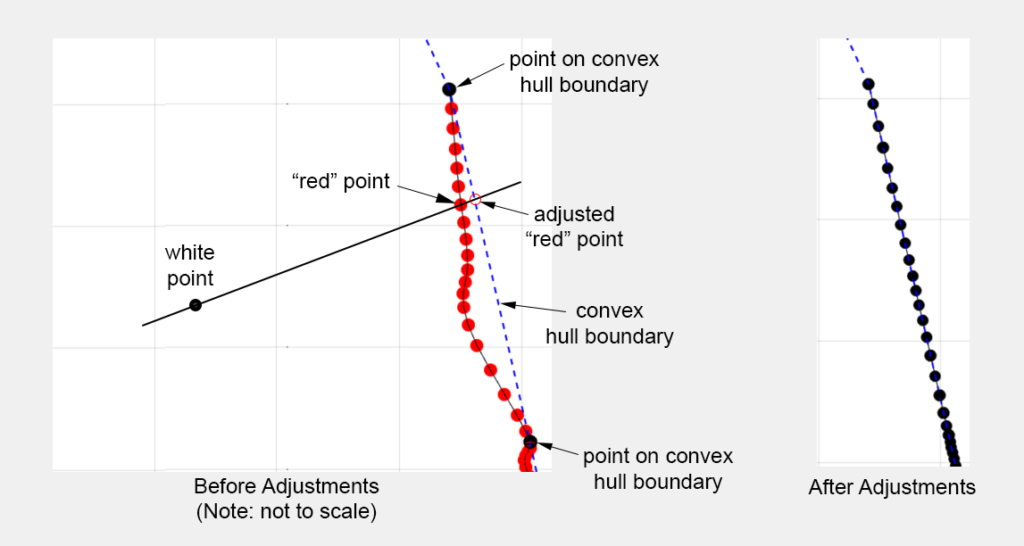 Figure SD-2. Adjustment of an internal “red” point to bring it to the convex hull boundary.

We repeat this for other pairs of convex hull boundary points that enclose “red” points, and update the CMFs in a similar way. The final change to the CMFs is very small; the largest change in any one element of the matrix is only 0.011. Figure SD-3 depicts this convexification at the far blue end of the spectral locus. 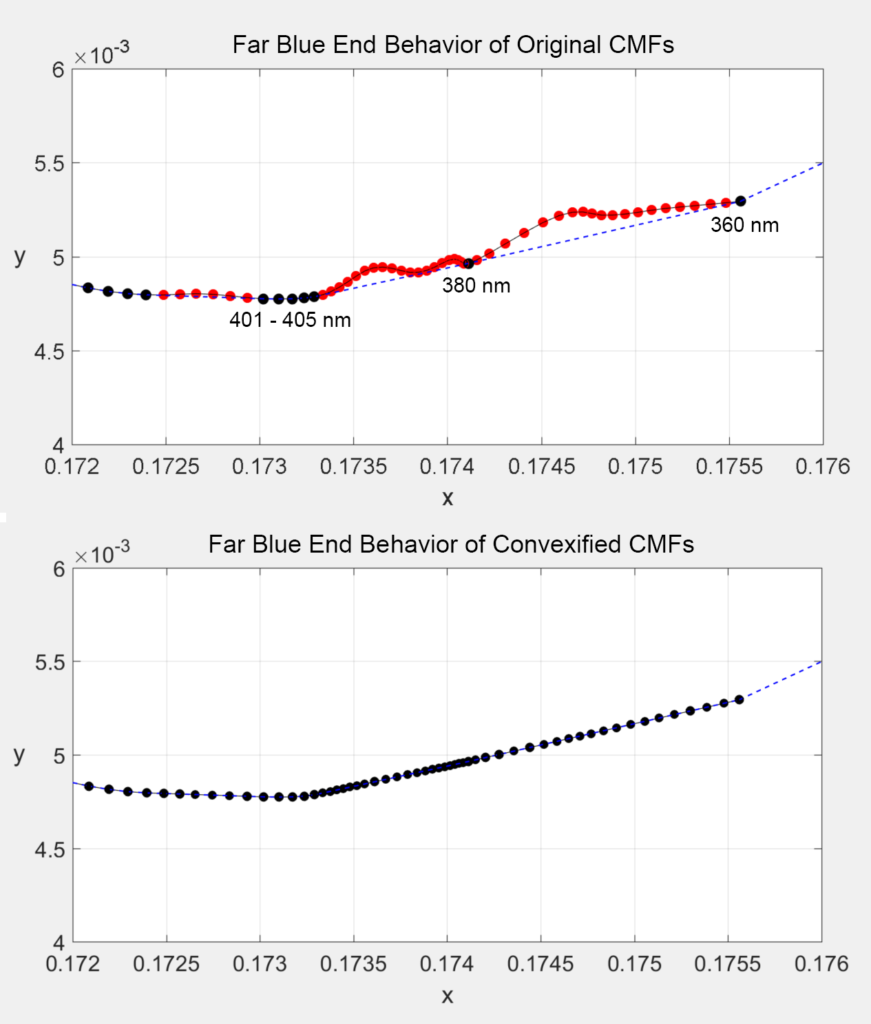 CIE chromaticity diagram before and after convexification.

There is one other adjustment that must be performed. Close inspection of the far red end of the chromaticity diagram reveals that the distribution is not “well-ordered in wavelength,” as West and Brill discuss in their 1983 paper.

Instead, the sequence of points zigzag back and forth many times. Figure SD-4 shows the far red end of the spectral locus (lower-left figure) and the sequence of

plotted against wavelength (upper-left and lower-right figures). For purposes of this experiment, the final rows of the CMFs where the zigzagging occur are removed (700 nm and beyond). This final adjustment yields CMFs that are fully convex and well-ordered in wavelength. 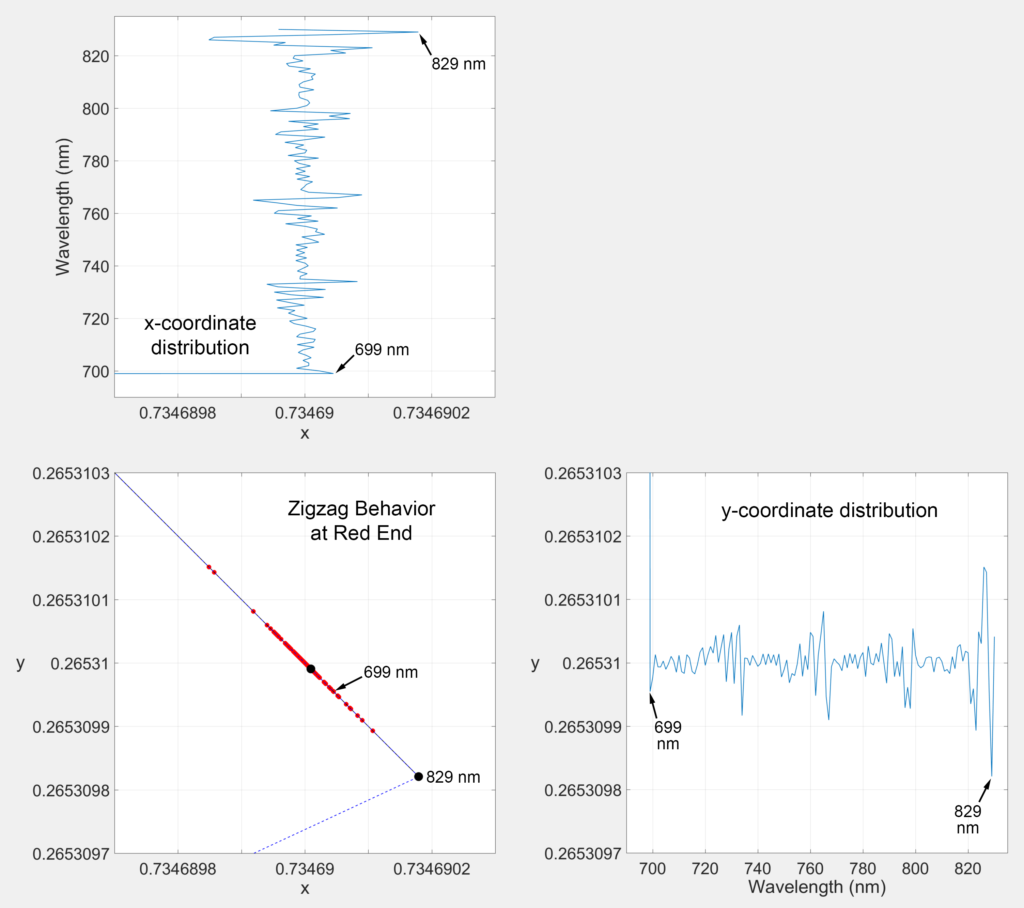 The experiment that produced Figure 6 in the Article is now repeated with the new, convexified and truncated CMFs. It is found that the LP produces mostly two-transition Schrödinger colors in the regions where it originally produced higher-transition colors. However, there remain some small regions of very high-transition colors. This behavior is shown in Figure SD-5. Only the top half of the OCS is shown as the lower half is again a point-symmetric copy of it. 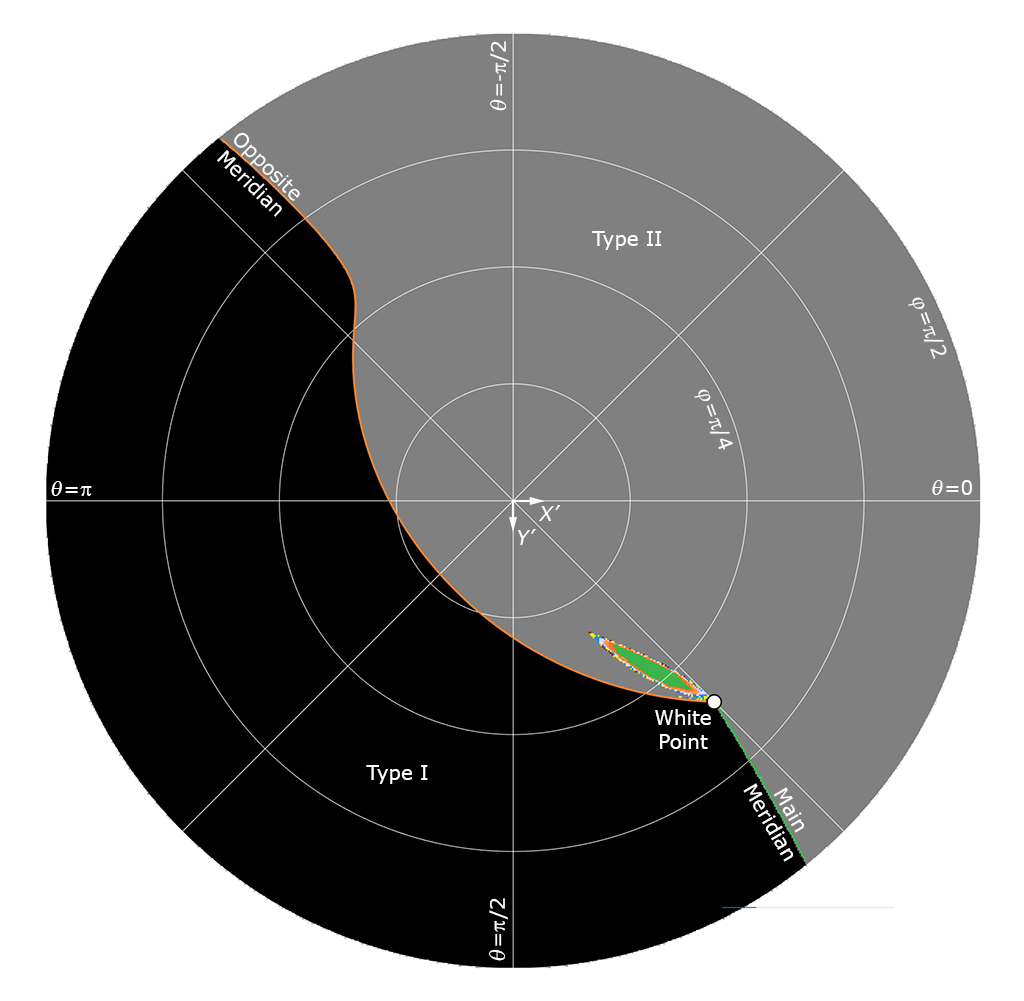 Figure SD-7. A 20-transition LP solution and a two-transition color in the same direction.

Note that there are two reflectance spectra plotted here, both as bar charts. One of them is filled in blue, and the other is only outlined in black.

Further investigation reveals that these two reflectances yield exactly the same tristimulus values (to machine floating point noise), and are therefore metameric to one another. They both are located the same distance from the center of the OCS, and are therefore both members of the optimal object color set that resides on the OCS surface.

We can conclude that the linear portions of the convexified and truncated CMFs are responsible for higher-transition colors metameric to two-transition colors, both belonging to the optimal object color set, as predicted by Schrödinger.

Section 5 of the Article compares the high-transition, LP-generated optimal color to the two-transition Schrödinger color existing along a common ray emanating from the 50% gray point in the center of the OCS. In order to compute the two-transition color, it was necessary to determine the

color descriptors, as developed by Alexander Logvinenko in his “object color space” paper.

Each point on the surface of the OCS has corresponding, unique

color descriptors, and these descriptors can be computed from the spherical coordinates

. These two color descriptors are then used by the MATLAB code developed by Masaoka and Berns to generate the two-transition color.

Figures SD-8 and SD-9 present contour plots of the two color descriptors on the polar mappings of the spherical coordinates for the top and bottom halves of the OCS. 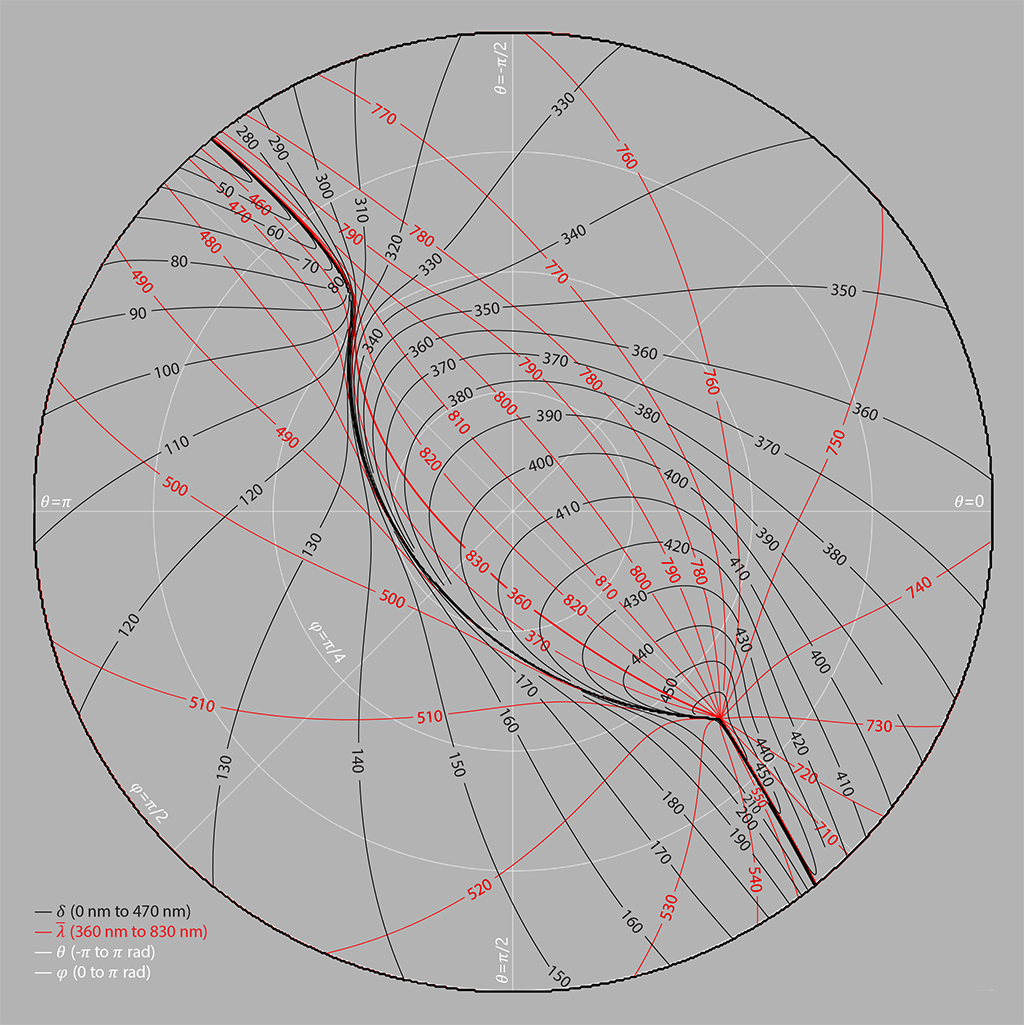 Figure SD-8. Object color space color descriptors for the top half of the OCS. 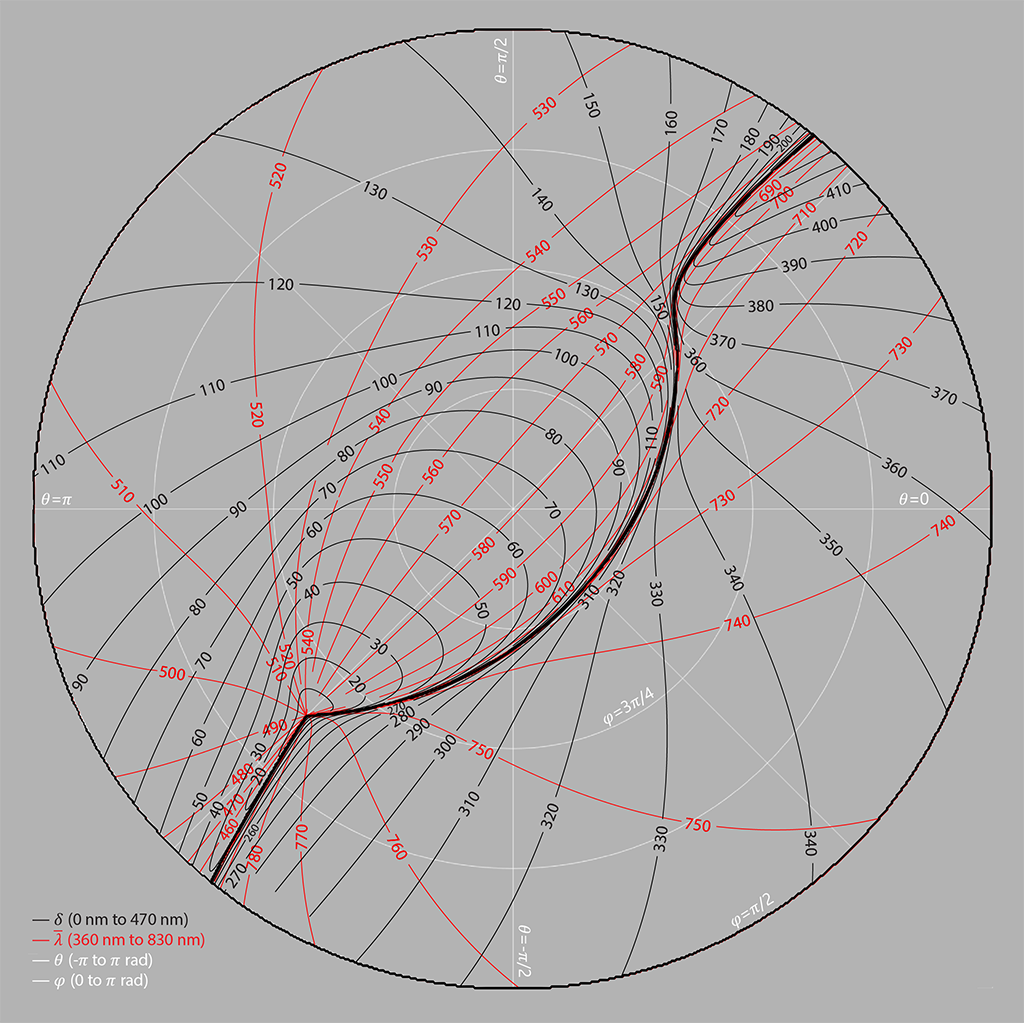 Figure SD-9. Object color space color descriptors for the bottom half of the OCS.

The author wishes to thank Michael Brill, Paul Centore, Glenn Davis, and Alexander Logvinenko for their insights that helped to strengthen this presentation.