BLIFNAR stands for “blinky lights for no apparent reason.” I’ve had one in my window for more than a decade, greeting me every time I happen to walk by it at night. During the day, it charges up by solar power; at night, it blinks–a nice soothing type of blink that bursts to life and then slowly decays. It it could make a sound, it would probably be something like “PUMMmmmm. 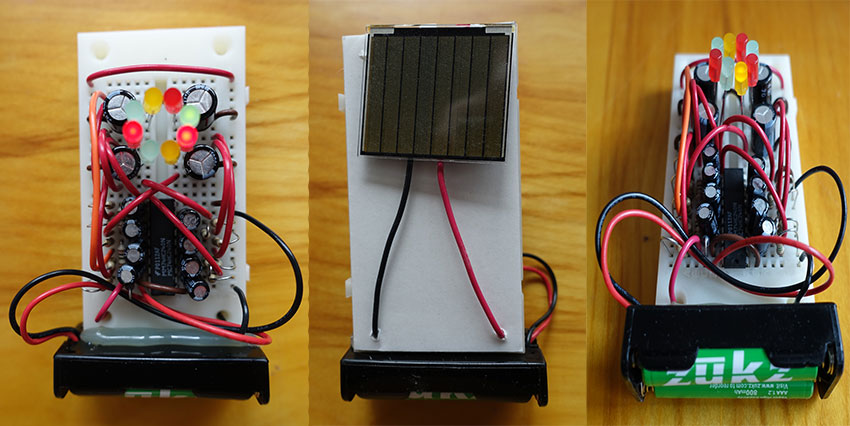 Here it is in action:

Back in the ’90s I taught a class called “Creative Mechatronics” that introduced students to the joys of the “maker” movement. This was one of the projects we built.

I’m going to first give instructions on how to build one, and then discuss how it works for those who are interested.

Here are the parts needed:

These tools will be needed:

This PDF file lists the construction steps. The “location” listed is the pair of hole locations identified on the prototyping board. The placement of the 74HC240 isn’t listed on the PDF, but it should be placed on the proto board with pin 1 in hole F1, spanning the E and F rows.

Be sure to use red, yellow, or green LEDs. The blue and white ones have forward voltages that are too high for this circuit. A forward voltage of 2.2 to 2.3 volts seems to work well.

The eight assorted resistors will control how fast the LEDs will flash, and how “random” they will appear. Smaller resistances will give faster flashes. Try various combinations to find a pleasing flash pattern.

After supervising the construction of almost a hundred of these circuits by students, I’ve noticed that sometimes not all eight LEDs will flash when the circuit is very slowly activated at sunset, having instead only six, four, or two of them flashing. It appears that certain combinations of the eight resistors causes this. If you experience similar symptoms, try rearranging the eight assorted resistors or select a different mix of values. This has always solved the problem in my experience.

The BLIFNAR will work best if placed in a sunny window with the solar cell pointed outside. Enjoy!

Here is the first circuit subsection: 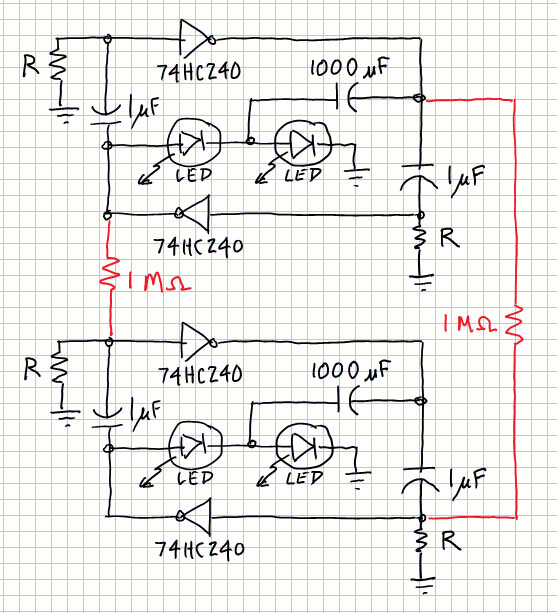 Portion of the circuit driving four of the eight LEDs. This subsection is repeated for the other four LEDs.

It contains two sub-subsections that each drive two LEDs. The two sub-subsections are loosely coupled through two 1M ohm resistors. The outer loop of each sub-subsection is a relaxation oscillator that flips the halves of the loop between high and low at a rate determined by the two resistors labeled “R.” Inside the loop are the two LEDs and a large capacitor responsible for lighting them up. Each time the outer loop switches states, a doubled voltage is presented to one of the LEDs, which exceeds its forward voltage and causes it to light up and then dim as the large capacitor charges or discharges. This circuit subsection is repeated for the other four LEDs, using the remaining four gates of the ‘240 inverter IC.

Power to the oscillator is supplied by the gates, which get their power from the two batteries (via +V and ground): 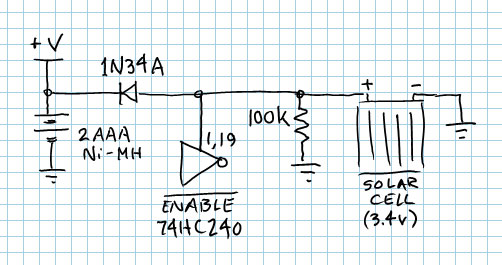 The circuit subsection responsible for powering the circuit and sensing when it is dark and time to flash.

The solar cell is attached to the two enable pins on the 74HC240 (pins 1 and 19, enabled when low). When it is dark, the solar cell is unable to provide enough voltage to overcome the 100k ohm pull-down resistor, and enables the IC. The 1N34A diode prevents the battery from killing the enable action, and also provides a pathway for the solar cell to charge the battery when it has light on it. A low voltage drop on the diode makes the charging more efficient. A Schottky diode could probably be used instead. A regular switching diode might even work, perhaps with a somewhat higher-voltage solar cell to compensate for the higher voltage drop.

I feel there is much room for improvement with this circuit, for example:

I don’t know if I’ll manage to get to any of these “wish list” items. If you have experience with circuits and can provide insight, please comment below!