This page contains supplementary documentation for the article “Numerical Methods for Smoothest Reflectance Reconstruction,” which has been published in Color Research and Application on November 1, 2019 (online) and December 10, 2019 (print). The paper citation is “Burns SA. Numerical methods for smoothest reflectance reconstruction. Color Res Appl. 2020;45(1):8-21.” The paper PDF appears to be freely available at the journal’s web page, but if not, please contact me if you’d like for me to send you a copy. Any reference to “the Article” on this page refers to this document. The documentation that follows is organized according to the section numbers appearing in the Article.

Please note that the content of this supplementary documentation page should not be considered peer reviewed by the journal, as it may be updated at any time. This page was last updated on the date shown at the top of the page.

Testing Whether a Color is Within the Spectral Locus

1. The function computes the projective transformation from XYZ space to the x-y plane, so that the test for being within the locus is reduced a dimension to being within a 2-D polygon.

2. While the shape of the object color solid depends on the illuminant, the location of the spectral locus in the x-y plane is independent of illuminant.

3. Be sure to pass an XYZ triplet that sums to a number far enough from zero to prevent overflow when computing xyz = XYZ/sum(XYZ(:)). The colon allows the input XYZ to be a row or column vector.

4. The resolution of A (number of rows) affects the shape of the computed spectral locus. See Section 6 of the Article for related discussion.

Values of XYZ that return a true value for “in” (logical 1) can be represented by spectral power distributions that are strictly positive. Here are examples of how to use the function:

Testing Whether a Color is Within the Object Color Solid

Method 3 operates on tristimulus values that fall within the object color solid. This MATLAB/Octave function will return a logical true/false indicating whether the input XYZ is strictly within the solid: 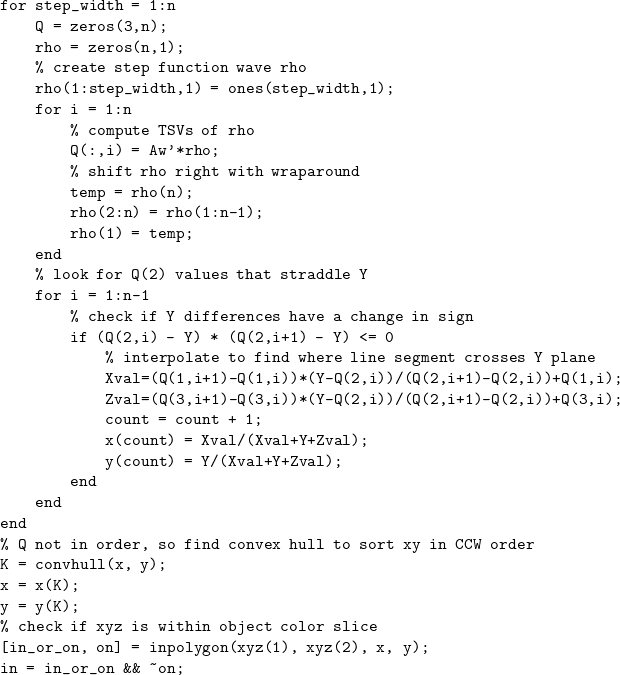 The object color solid boundary is constructed here by a brute-force approach, considering all possible “optimal” colors. First, a 0-1 step function is constructed of varying width (from one wavelength band to all n bands), and then each step function is shifted along the wavelength axis (with wraparound) to produce n shifted versions. This produces n^2 reflectance functions and all optimal colors that can be represented with n wavelength bands. As each step function is shifted, we check if the Y tristimulus values corresponding to adjacent step functions straddle the target Y value. If so, linear interpolation is used to estimate the (x,y) values of the intermediate color at the intersection with the target Y plane. These (x,y) coordinates are collected, and a convex hull function is used to sort the object color solid slice in CCW order. Finally, as with the previous function, inpolygon is used to assess if the input color is within the Y-slice polygon.

Values of XYZ that return a true value for “in” (logical 1) can be represented by reflectance distributions that are strictly between 0 and 1, representing object colors. Here are examples of how to use the function (using an equal energy illuminant that is compatible with a 36×3 A matrix):

Sections 3 and 4: Python Implementation of Methods 2 and 3

All source code presented in the Article is written in the MATLAB/Octave language. Since publication of the Article, methods 2 (for real colors) and 3 (for object colors) have been implemented in the Python programming language as well. These implementations are available here. This web page also includes Python source code for checking if a color is within the spectral locus, or if it is within the object color solid.

If programming method 2 or 3 outside the MATLAB/Octave environment, and using an implementation of the LAPACK library for linear algebra (such as the linalg.solve function in the Python SciPy package), be sure to set the “assume_a” input argument to “sym” to indicate that the square matrix is symmetric. This will speed up the computation. Also, the Python SciPy package is dependent on the NumPy package. It is important to install the “Numpy+MKL” version of NumPy, which is linked to the Intel Math Kernel Library and includes required DLLs in the numpy.DLLs directory, and uses an optimized BLAS (Basic Linear Algebra Subprograms) library. The SciPy functions for linear algebra will solve MUCH faster this way. 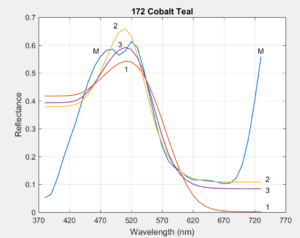 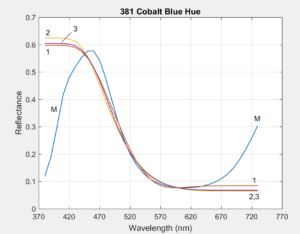 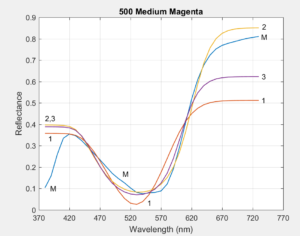 , who developed the objective function to minimize slope squared over the visible wavelengths. In his “unconstrained” formulation, the only constraint imposed on the solution ensures that the triplet of tristimulus values computed from the reflectance reconstruction matches the desired target triplet. In regions of the object color solid where the unconstrained solutions have

values outside the 0-1 range, van Trigt introduced equality constraints to enforce that

remains in the range 0-1. He also constrained the system so that the slope of the reconstruction is continuous everywhere. Implementing his method requires that 16 different cases be considered.

To simplify this task, Li and Luo

. This change mades the problem easier to solve, but introduces the possibility of slope discontinuities in the solution at points where the inequality constraints transition from active to inactive or vice versa. In some cases, slope discontinuities can give the reconstructed reflectance curve an unnatural, truncated appearance. The remainder of this section examines the solutions produced by Li/Luo’s implementation of van Trigt’s method (called vTLL here) in comparison to the Article’s method 3 solutions.

was introduced in the Article as a measure of how well a reflectance curve matches a reconstructed one with the same tristimulus values, weighted by the luminosity curve (

) to give more emphasis to the wavelengths to which the eye is more sensitive, and finally normalized by dividing by the number of wavelength bands,

This is plotted below, after sorting the 1485 results in increasing order: 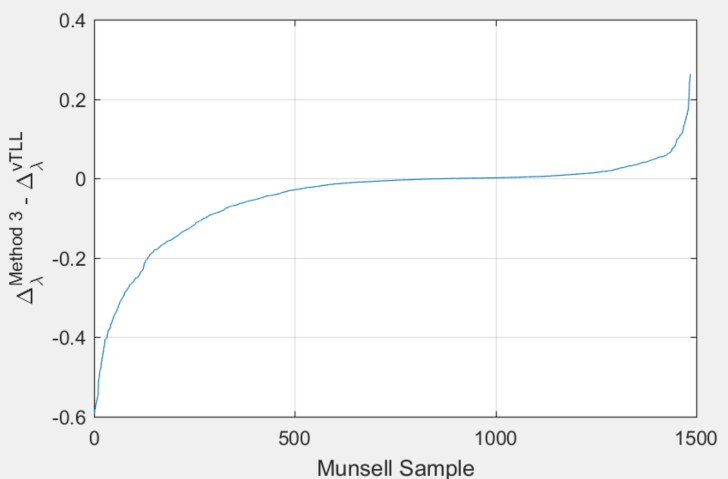 discrepancy compared to the vTLL method when applied to the Munsell colors. Figures 3 and 4 of the Article present examples of the differences in the vTLL solution vs the method 3 solution.

Further discussion of the differences between method 3 and vTLL can be found here.

(This section is being re-written as a full research paper.)