This page contains supplementary documentation for the article “Chromatic Adaptation Transform by Spectral Reconstruction,” published in Color Research and Application in 2019 (Burns SA. Chromatic adaptation transform by spectral reconstruction. Color Res Appl. 2019;44(5):682-693). Any reference to “the Article” on this page refers to this document. The documentation that follows is organized according to the section numbers appearing in the Article. A preprint version of this paper is also available here.

Please note that the content of this page should not be considered peer reviewed by the journal, as it may be updated at any time. This page was last updated on the date shown above.

An instance of CAT02 producing a destination color with negative tristimulus values is presented here, specifically, for the case of Munsell 2.5G 4/8. The spectrophotometrically measured reflectance curve for this color is: 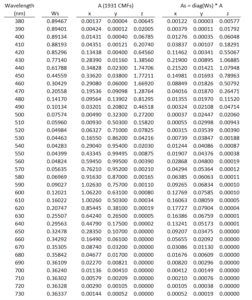 Next, the source tristimulus values,

, are computed from the reflectance curve for Munsell 2.5G 4/8,

Forming the CAT02 matrix starts with the transformation from tristimulus values to sharpened cone response space,

The source and destination white points are

The final CAT02 matrix can now be computed as

, produced by CAT02 from the source tristimulus values,

, ends up with negative tristimulus values:

Table 2 in the Article presents

, and the CAT-predicted destination colors,

To confirm the accuracy of these computations, they were compared to instances of the same computation by other authors in the literature, and were found to match exactly the published

=1 color difference values for CAT16 have not been found in the literature, for verification purposes.

Click here to open a text file containing a numerical example of the “spectral_recon” function shown in Section 5 of the Article, applied to

= (0.7,0.6,0.5) using equal energy as the reference illuminant. It is best viewed by copying the text into an editor like Notepad and turning off word wrap. The values of each assignment statement on each line of the code are shown so it can be used to debug an implementation of the method. There may be small differences from one implementation to the next, mostly due to differences in floating point precision and different implementations of linear equation solving among the various utilities.

The author has also developed additional algorithms for reconstructing reflectance curves, including some that put an upper bound on the curve,

. See this web page for more information on these additional methods and comparisons to natural paints and pigments, including Munsell color chips. An application of these spectral reconstruction methods for subtractive color mixture can be found here.

Here are two MATLAB/Octave functions that implement the proposed CAT. Note that the matrix

in other presentations concerning reflectance reconstruction. The switch to

in the CAT presentation is due to the convention of

being used as the degree of adaptation.

should equal 1 in both).

Here is an example:

The last example demonstrates that achromatic source colors map to achromatic colors with respect to the destination illuminant, as expected.

All source code presented in the Article is written in the MATLAB/Octave language. Since publication of the Article, the CAT has been implemented in the Python programming language as well. This implementation is available here.

The Python implementation uses the SciPy package to implement the LAPACK routines for linear algebra. SciPy is in turn dependent on the NumPy package for numerical math. It is important to install the “Numpy+MKL” version of NumPy, which is linked to the Intel Math Kernel Library and includes required DLLs in the numpy.DLLs directory, and uses an optimized BLAS (Basic Linear Algebra Subprograms) library. The SciPy functions for linear algebra will solve MUCH faster this way.

To show how substituting some instances of

makes the proposed CAT symmetric, we start with the simpler case of the non-log version of reflectance reconstruction, since it has a closed-form solution. The NLP being solved in this case is

See Section 3 of the Article for definitions of the symbols above. Again, note that the symbol

is used here instead of the customary

to represent the degree of adaptation. The stationary conditions arising from the method of Lagrange multipliers are

Solving the first stationary condition for

Substituting this expression into the second stationary condition and solving for

Finally, substituting the expression for

into the previous equation gives us a closed-form solution for the spectral reconstruction:

To compute how this reconstructed reflectance would appear under a destination illuminant, we simply pre-multiply

by a destination-illuminant-referenced set of color matching functions,

This gives us a 3

3 CAT matrix of the form

Some comments are in order at this point.

matrix in the form as presented in the Article is singular, and so it is not suitable for this version of spectral reconstruction. However, a slight change to it, such as changing the first and last elements of the main diagonal to 4 instead of 2, makes the matrix invertible. The effect this change has on the reconstructed reflectance curve is to pull the ends of the curve to zero. This can be beneficial in some cases, as colored objects found in nature (e.g., common pigments; see Figure 8 in the Article) often have reflectances that drop to zero on the ultraviolet side, so the reconstruction is actually a better match on that end. The singularity of

will not be an issue in the subsequent development, as it will not be inverted in the end result (Equations 8 and 9 in the Article).

2. The CAT derived above needs only to be computed once for a source/destination illuminant pair. Once this 3

3 CAT matrix is formed, each destination color computed from a source color requires only simple matrix multiplication, just as is the case with existing CATs. It will in fact perform very well when tested against the corresponding-color datasets. Unfortunately, it is capable of producing destination colors with negative tristimulus values, since the reconstructed reflectances can have negative values. The propensity for generating negative destination colors with this CAT is even more pronounced than it is with CAT02 and CAT16, and so it is not recommended for this reason. Nevertheless, it is a useful stepping stone in explaining the symmetric version of the method proposed in the Article.

By replacing two instances of

and two instances of

The central pair of expressions (in bold) now cancel, and then the remaining two expressions also cancel, leaving the identity matrix, as desired. The author provides no other justification for the change to

other than the observation that it simply works to make the CAT symmetric without any apparent negative side effects.

If we trace backwards to locate where the change to

could first have occurred, we find that if the stationary conditions are altered to be

then the symmetric form of the CAT is produced. This change only affects the Lagrange multiplier term in the first set of stationary conditions and does not alter the constraint expression,

, which is necessary to ensure that the reconstructed reflectance has the required

Now turning to the log version of the spectral reconstruction used in the Article, an analogous treatment is applied to the first set of stationary conditions:

This change will result in the symmetric version of the proposed method, as presented in Equations 12 and 13 of the Article.

UPDATE 2/11/2020
Back when the paper was published, I indicated that the earliest point at which the switch to

could occur was at the stationary conditions stage. I have since come to realize that it can be traced all the way back to a modified form of the original optimization statement. Considering the non-log version again, we replace

The new term in the objective function is

, which is a diagonal matrix with the inverse of the destination illuminant on the main diagonal (and zeros elsewhere). If we construct the stationary conditions, we get

Notice that if we multiply the first of these equations by

The final step is to note that

, which transforms the equations above to the form shown in Equation 15. The remainder of the explanation of the symmetric CAT follows from Equation 15 above.

It is natural to ask how we should interpret the new objective function of Equation 18. One way to do this would be to absorb the illuminant term into the

term, yielding some sort of illuminant-weighted finite-differencing matrix. Perhaps a better way to express it would be to split the illuminant term and equally absorb it into the two

The objective function can now be interpreted as a sum of squares of differences:

. In the symmetric version of the CAT, we are seeking an illuminant-weighted smoothest (least slope squared) reflectance reconstruction to account for symmetry.

Table 4 of the Article demonstrates the symmetric version in comparison to the original version:

See the Article for the meaning of the various columns. The entries in this table are produced by the following process.

First, the MATLAB/Octave function for reconstructing a reflectance curve for the original version is:

and the corresponding similar function for the symmetric case is:

The main difference is the use of a dual-referenced set of CMFs in the symmetric version,

The following MATLAB/Octave commands create the values in Table 4 for the non-symmetric case:

The symmetric case in the Table has values generated by the following MATLAB/Octave commands: